We began following the Globetracker’s Mission: Finding Dewey last week (thanks to Mrs. Bonfigli and Ms. Rayner for sharing!). Geo and Meri, teenagers on a secret mission to locate Dewey (a truth-sniffing dog), share their adventures via their blog, text messages, and a variety of online maps and resources.  They work with Uncle GT and trek around the globe hot on Dewey’s Trail.  Geo and Meri live in the Southwestern city of Phoenix, Arizona.  See map below.

Geo and Meri headed to New York City to find Dewey in the first episode. New York City is on an island!!!! They went to the Empire State Building to get their first clue. What a view. Check out the picture below.

We learned about time zones in this blog.  Phoenix is in the Pacific Time Zone and New York is in the Eastern Time Zone.  It’s three hours earlier in Phoenix.  Wow.

Geo and Meri’s first clue gave them three places to look for Dewey:Seattle, WA, Vancouver, Canada or Anchorage, AK.  We thought they should head to Seattle first and guess what??  They DID!!!!!

Did you know it rains 50% of the time in this Northwestern City!  That’s different than in the Southwest where Geo and Meri live.  Phoenix is in a desert and gets very little rain each year.  While awaiting word of Dewey in Seattle, they visited the Space Needle.  I found this picture.  That is really high.  Emal has been to the Space Needle.

Geo and Meri got word that a dog was on his way to the airport in Juneau, Alaska.  They hopped on the first plane and were hot on Dewey’s trail.  In parts of Alaska it is dark 24 hrs./day in winter and light 24 hrs./day in summer.  Juneau has lots of water around it.  Geo and Meri visited Mount McKinley in Denali National Park.

At the Seattle airport, a custodian, gave them a driver’s license of Claude Equator and said he saw him with Dewey!  Claude lived in Vancouver. . . so close to Seattle.  We had to help Geo and Meri decide how to get to Vancouver the quickest possible way.  We voted for them to take the 7 pm. train.  We’ll have to wait until next week to see what happens!

Welcome to your brand new blog!

This is a sidebar and can be changed in Widgets in your dashboard.

You can also modify number of sidebars in theme options!

Share a book review on Shelfari, where this reader meets fellow readers. 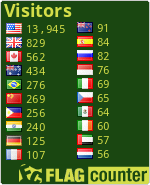